Hi guys!  It’s been a while since I’ve posted one of these.  For those of you new to the blog, on Sundays (if I post), I like to post about games that have great soundtracks that AREN’T Lesser-known.  Today, we’ll talk about Super Mario World 2: Yoshi’s Island, composed by Koji Kondo.

Here’s the complete OST for your listening enjoyment.  Below, I’ll post some facts about the game.

The goal is to remove Burt the Bashful’s pants. And we’re okay with this.

At any rate, I hope I helped you feel some subtle nostalgia today!  Please feel free to leave comments!

On February 2nd, my band, Beta Test Music (betatestmusic.com), will be performing another big concert of video game music and other nerdy favorites at First Unitarian Church in downtown Philadelphia (see here for information and tickets).  This series of posts will highlight the music that I arranged for the concert, explaining the choices in musical selection, instrumentation, and overall presentation.

END_OF_DOCUMENT_TOKEN_TO_BE_REPLACED

Happy New Year and all that belated stuff!

Wow, it’s been over a month since I’ve posted.  The holidays were absurdly busy.  I’ve been working on a ton of stuff right now (including a MASSIVE Beta Test Music concert on February 2nd… more about that in the next couple posts.)  For now, though, it’s Sunday and that means it’s time for another Sunday Game Soundtrack.  Today, let’s listen to the soundtrack to the SFC/SNES’s 2nd best selling game of all time, Donkey Kong Country.

END_OF_DOCUMENT_TOKEN_TO_BE_REPLACED

It’s Sunday.  Time to highlight another legendary soundtrack!  Today, we’ll listen to Nintendo’s Super Mario Kart, one of the most influential games of the 90s.

Some cold hard facts:  Super Mario Kart has sold more than 8 million copies since its release in 1992.  It single-handedly launched the entire kart racing genre of games.  It was the first game to feature multiple Mario series characters in a non-platforming game.  Bet you didn’t think you’d learn that today?

This game is scored by Soyo Oka.  Her other original works include Pilot Wings, Wario’s Woods, and the SNES port of Sim City.  She also did all the arranging and original composition for Super Mario All-Stars.  Given her work, I’d say that Super Mario Kart represents her magnum opus.  Her use of style (from latin jazz to metal to steel drums) makes this soundtrack interesting.

An interesting aside:  Super Mario Kart was not originally developed as a game that would include Mario.  Shigeru Miyamoto stated that the original designs had a man in a cart driving around tracks.  They decided about 2-3 months into development of the game to include Mario.  How weird would this game have been without Mario characters?

Okay, let’s listen to the music.  Here’s the complete soundtrack below, posted on YouTube by f4m1lyGuy10.

Enjoy as always!  Expect to see some more posts about an upcoming concert I have with my band Beta Test Music on December 1st.  We’re playing some awesome stuff so stay tuned! 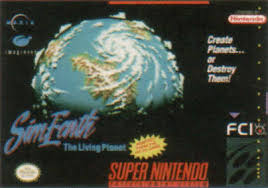 Every once in a while, you stumble upon a soundtrack by accident that triggers incredible amounts of nostalgia.  Such a moment occurred today when I rediscovered the OST for Maxis’s SimEarth for SNES.  Let’s take a listen!